This species of millipede looks rather similar to a woodlouse, and this can often lead to some confusion in identification. Its common name refers to its habit of rolling into a tight ball to protect itself from predation, and to prevent itself from drying out. It is greyish-brown to blackish in colour, with about 11 tight-fitting calcareous plates running down its body. It has numerous legs. Can be confused with the Pill Woodlouse (Armadillidium vulgare). Length 13 to 15mm. 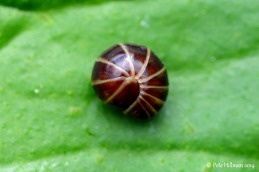 They mature when they are around 3 years old, and can live for up to 7 years. It feeds on various rotting plant material, and helps to recycle soil nutrients.

Seen all year round. Found in woodlands, grasslands, hedgerows and gardens, often found under logs or stones, and amongst leaf litter. It tends to be more active at night. A common and widespread species throughout Britain, except the far north where it is absent.

There are 978 species of flora, fauna and fungi featured on ‘A Nature Journey’ and counting. The hope is to stimulate awareness and interest in the natural world so we may all come to respect it more and preserve it for future generations to appreciate and enjoy.